What Violinists Can Teach Us About Playing Roller Derby

People at the very top don’t just work harder, or even much harder than everyone else. They work much, much harder.

In 1993, I was 11 years old. I don’t have a picture, but if I had one to show you, in it I would: have a perm and be wearing a headband/giant t-shirt/stirrup leggings combo for the ages. Not very much exciting happened for me in 1993. I was in a play about recycling. I spent my recess time studying for Math Olympiad. And I was written up for the first time ever for calling a classmate an {GASP!} asshole.

(Because, to be honest, she was totally being a real asshole.)

During the time that I was experiencing the beginning of the least illustrious period of my life, an expert on expert performance was studying something big: the power of deliberate practice.

I like to imagine that our lives were traveling parallel paths. I have a very good imagination.

Anders Ericsson — the expert performance expert — spent his 1993 studying a group that doesn’t often get lumped in with roller derby skaters: violinists. His work with this group of violinists is often considered the seminal work on the value of hard work versus the value of intrinsic talent.

The surprising result, quoted frequently by writers (see above), is that intrinsic talent might be overrated.

But that’s not even a small fraction of what this study actually figured out.

Ericsson completed his work at the Music Academy of Berlin, where he studied 30 violinists divided up into 3 groups:

This is what Ericsson found:

But when Ericsson and his colleagues dug deeper, they started to believe that the need for increased sleep, naps, and general recovery time was related specifically to the intensity of a violinist’s practice.

The more intensely and deliberately you practice, the more exhausting it is.

Research conducted since this study, has begun to suggest that it requires at least 10,000 hours of practice over at least 10 years to achieve “mastery” of a skill.

So…I’ll never be a master. Is that what you’re saying?

No. That’s not what I’m saying (and what a depressing blog post that would be). What I am saying is that we can use this research to make the most of our practice time instead of lazily skating around in circles all day.

For the rest of this post, use of the word “practice” is going to loosely encompass all of the things skaters should be doing to improve their skill base. It’s a magical combination of skating, cross training, solo footwork practice, and watching high-level games. 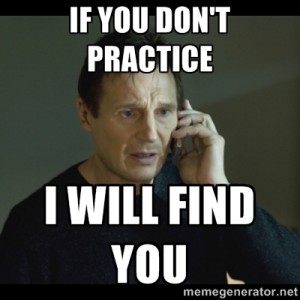 Chances are good that you’ve stumbled upon this #truthbomb all on your own. Roller derby is not fun and games all the time. Not at practice. Not at league meetings. And, if you’re an introvert like me, definitely not during street teams.

The most crucial ingredient for consistent improvement (and expert performance) is motivation.

Even when it sucks and you don’t want, you still do it. That goes for attending practice, working out off-skates, solo footwork, and watching derby.

Honestly, if you’ve made it past your minimum skills AND have been skating with your team for 6 months to a year, chances are good your motivation is on point. You’ve been through the highs and and lows and you stuck around.

However, it’s important to make sure that your motivation for roller derby extends to all of the parts of practice that will help you improve. So…if you aren’t doing so already:

When you very first start skating, you kind of can’t help but get better. You have to. Or you’ll fall on your ass. But there’s also a difference between what’s happening in your mind during your first weeks and months of skating versus what’s happening after a year or two of skating.

When I very first started skating, I was both physically and mentally exhausted after every practice.  Why? First, I was asking my body to do things that it had never done before. And second, my mind was hyper focused on what I was supposed to be learning.

This hyper focus (or sustained, absorbed attention) was required to learn even the smallest thing.

Now that I’m not constantly in danger of eating shit every time I attend practice, my mind wanders. My hyper focus and sustained, absorbed attention is harder to come by. And, as a result, I often leave practice feeling like I haven’t done much that day.

On days when I show up, focus hard on the things I’m doing, and absorb myself in the tasks set before me, my skills improve pretty dramatically. Even for someone that’s been skating for 5+ years.

(**BONUS: Practice seems to go a lot faster on those days, too.)

The goal of deliberate practice is not doing more of the same. It involves engaging with full concentration in a special activity to improve one’s performance.

All things are easier to maintain when we remain consistent.

You don’t have to go so far as to schedule exactly what days and times you do solo footwork versus derby watching (although I do), but you need to make sure that you’re practice remains consistent.

Don’t expect that if you go a month or two without watching derby that it’s going to be easy to get back into it. It won’t be. You now have other more tempting and seductive things to take up that time. (Especially if you’re watching it with sustained, absorbed attention.)

The hallmark of the road to mastery is “focused repetition at regular intervals over extended periods.” (Schwartz, 228)

I’ve already drowned you in data, so I won’t give you anymore EXCEPT to say that when you’re sleeping, you’re not learning.

Why was that important to get out there?

Because it’s true. But also because sleep is where we organize, analyze, and make sense of what we’ve learned. Including motor skills.

Almost as important, is that sleep helps us replenish our energy so that we can participate in deliberate practice again.

There’s this thing in derby where we all push ourselves WAAAAAY harder than is absolutely necessary. The violinist study concluded that 4 hours a day is the maximum that the best performers practice. And the scientist behind the study, Anders Ericsson, determined that 4 hours per day is “…a more general limit on the maximal amount of deliberate practice that can be sustained over extended time without exhaustion.”

Practice does not quite make perfect. It’s practice with a night of sleep that makes perfect.

So be open to it.

Accept help with your footwork. Take recommendations on which games to watch. Ask your teammates to hold you accountable for your focus at practice. Go lift some GD weights.

Because all the practice in the world doesn’t mean anything if you aren’t practicing in the right direction.