The Sting of Ejection

I’m thoroughly disgusted with my performance. All the skills that I’ve been working so hard on have deserted me in this moment. I’m pissed off that I’m not doing as well as I think I should be. In a huff, I return to the side, take off my helmet, and toss it toward the end of the bench.

I throw that fucker so hard the outer shell cracks. There also may or may not be obscenities streaming out my mouth at the same time. On the heels of the performance, I get ejected from the game and have to leave the bench area.

That is the story of the first time I ever got ejected from a game.

I was a senior in high school, the captain of my softball team, and at the tail end of being heavily scouted by colleges in the area. I was having an off game – just one game – and couldn’t quite deal with that feeling when I had been getting my ego stroked by college level coaches. I was only seventeen, what did I know?

I still remember how it felt when I was forced to leave my team’s bench. I deserved to be ejected. My presence wasn’t helping my team. I wasn’t even THINKING about my team. But it felt like I had let them down. I HAD LET THEM DOWN. My selfish action had created a situation in which my team had to play without me.

I swore to myself as I geared down in the locker room that I would learn to control my emotions as a player. I vowed to always be level-headed and cool under pressure.

I haven’t been ejected from a game since. 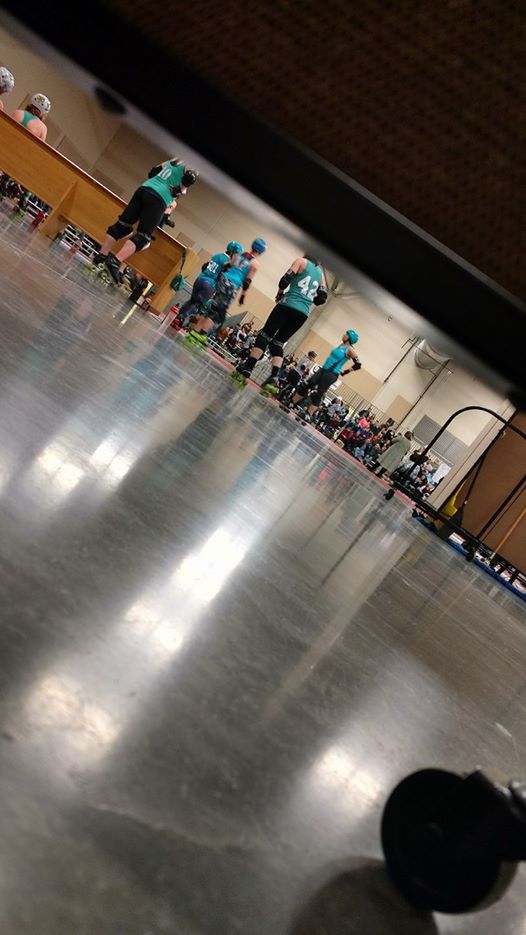 This is what it looks like when you’ve been ejected from the game and aren’t allowed to leave the locker room.

When I posted the above picture on my Facebook wall and mentioned that I was sitting the second half out – not by choice – the general reaction from people that knew me well was the shocked face emoji right next to the like button. I’m not a hot head. Anymore.

My first, very honest reaction to being ejected from the game was to get pissed. “This is utter bullshit,” I thought. But anger was followed swiftly by doubt. The words “reckless” and “dangerous” dug into me like knives. I don’t play that way. Do I?

I got pulled away from my team during our halftime meeting. Along with my captains. In front of everyone. To be told that I was being ejected from the game for a “reckless and dangerous” block.

Which swung me back around to anger.

What should I do? How do I handle this?

THE WORLD IN WHICH I’M A HOT HEAD.

I look the head ref directly in the face and tell her exactly what I’m thinking: This is utter bullshit. Have you seen how many reckless and dangerous blocks the opposing team has been throwing? You’re standing there telling me that it’s not intentional, that you KNOW I didn’t do it on purpose, that we’re both equally in control of our bodies on the track. Yet I’m being thrown out. That’s fucked up.

I storm back to my bench while unsnapping my helmet. (I won’t throw it this time because I had to pay for it myself and it’s expensive.) Muttering under my breath – and then to any teammate within earshot – about how fucked up it all is. How bad the refs are. How unfair my life is.

I’m slowly infecting my teammate with all my anger and hatred directed at the refs and the opposing team. I’m like King Midas except everything I touch turns to rage buried just beneath the surface instead of gold.

Except, every single person on my team now knows that I’m sitting back there pissed off. A lot of them are pissed off, too. All the things that have mildly irritated them this far in the game are coming to a head now.

But that reaction doesn’t serve anything, does it?

What could my anger possibly do?

THE WORLD IN WHICH I’M *LESS* OF A HOT HEAD.

I look the head ref directly in the eye and nod as she tells me my fate. I have to swallow past the lump in my throat to respond with “Okay” and ask if I can come out and watch the game as a spectator. (Nope.)

I’m still fuming inside. I still disagree with the official decision. But I realize that screaming and yelling will actually make me look like the hot head that this ejection makes me feel like.

I head directly to the locker room but wave goodbye to my team and say good luck. I’m confident the captains will let everyone know what’s up in a much calmer manner than I could. It takes a few seconds in the locker room to compose myself but by the time my team gets there I’m able to tell them the truth:

This sucks and I’m totally bummed. But you guys don’t need to worry about it. Go out there and play your game and bring back a win.

A few teammates commiserate with me and I tell them the truth again:

And it DOES HAPPEN. I play a contact sport with people skating, turning, running, and gliding every which way. Sometimes collisions happen that have to be mitigated.

I appreciate the officials that are there trying to keep everyone safe. Even if, sometimes, it pisses me off.

THE SPACE BETWEEN EMOTIONS AND ACTIONS.

Although I’m mostly mad at myself for not being able to play a cleaner game. I’m a bit mad at not really knowing how to avoid that situation in the future.

I HATE that I got ejected. It feels like I might as well just have the word “asshole” tattooed to my forehead.

But what can I do?

Does just accepting the circumstances of that game make me helpless?

Giving into my anger and ranting and raving is when I would become helpless. I’d be at the mercy of my emotions instead of being in control of them.

There’s a space between when you feel an emotion and when you act upon it. That space feels so small sometimes; infinitesimal, unnoticeable. You can choose to give into your emotion at which point you become helpless in the face of it. Or you can choose a different path.

When I was seventeen, I didn’t recognize that space.

I guess I’m learning with age.

The next time you find yourself in the middle of a freakout, or moaning and groaning with flulike symptoms, or crying tears of regret, just ask: Is this actually making me feel better? Is this actually relieving any of the symptoms I wish were gone?