My Advice to Pregnant Prime (2 Years Too Late)

This was my first thought upon discovering that I was pregnant. A condition that, in roller derby, is often dubbed the “9 month injury.” Without getting into all the details, just know that — for me — getting pregnant was WORK. And I wanted to be pregnant (kind of). But the day that I saw that stupid pink plus sign, I didn’t want it. At all. I had just spent months recovering from an injury, was playing the best derby that I had ever played, and had just been named to my league’s all-star team; a team that would later end up ranked 88th in the WFTDA standings.

No matter how much you want a child or how much you went through to get one, the knowledge that you’re putting your athletic career on hold for 9 months feels a little bit like getting punched in the sternum by the Hulk.

Getting pregnant — and subsequently becoming a mom — has changed my priorities. (Duh.) But it’s also changed how I approach my training, my practice schedule, and nearly everything else having to do with this sport that I love.

Am I LESS committed to my sport now than I was 3 years ago? No.

Do I have to be smarter about where I show that commitment? Yes.

1) Everything is going to be so different than you ever thought.

But you can handle it.

I wouldn’t classify myself as “hippie-granola”, but some people might. Cases in point, my pregnancy was planned naturally: no drugs, no episiotomy, nothing but goodness and light and a warm bath. I was going to encapsulate my placenta (don’t ask if you don’t *really* want to know). I was going to breastfeed my kid until my tits fell off. I was going to love every minute of it.

Fast forward 2 years and here’s the reality: I caved and got an epidural. I was rushed into an emergency c-section. My son almost died in the NICU. My placenta was infected. And I couldn’t produce enough milk to feed a church mouse, let alone a human child. Not to mention that most of the time I don’t love it. I tolerate the bullshit to get to the moments when he hugs me.

I could make a laundry list of all of the things that were different about pregnancy than I thought:

The good news is that it becomes your new normal. And it’s pretty cool. 5% of the time.

Fuck ‘em right in the ear.

Hey Prime. Remember last night when you cried yourself to sleep because you feel like an epic failure. I mean, you can’t even give natural, vaginal childbirth to a healthy kid. Your son was up the entire night crying because you can’t produce enough milk to feed him. What’s wrong with you? — MY INNER MONOLOGUE

While the inner monologue of any new parent is tough — because who even knows what they’re doing?!? — it’s about to get worse. You’re going to get inundated by people telling you that formula is bad and your child’s going to end up like Sloth from the Goonies.

Not enough? Okay, you’ll also have people telling you that raising your child as a vegan is unhealthy. I mean your vegan pregnancy didn’t turn out very well, now did it? LOL *winky face* LOL

But once you stop being a vegan because it’s just hard and you can’t even cope with it and just eat a fucking hamburger already, your kid is going to have his testicles drop when he’s 4 because of all the hormones.

Provided you’re not really the scum of humanity, you’re going to do the best you can and your little dude  will turn out fine. Kind of. I mean, he’s pretty weird, but he’s alive. And he seems to love the shit out of you.

Which, honestly, will overshadow the evangelical on the corner telling you that you’re going to hell for letting him wear a pink shirt with cats on it.

3) You’re going to want to keep exercising. Maybe even skating.

Chances are good, if you’ve found out you’re pregnant and asked your doctor for exercise recommendations or whether you can continue skating, you’ve probably received the boilerplate (and useless) recommendation to “keep doing what you’re doing”. Try to refrain from saying what I said ‘– “Oh. Really? I should continue to play a full contact sport on roller skates.” *thick with sarcasm* — some doctors find this offensive.

NEWS FLASH: Something has definitely changed.

If you weren’t lifting heavy weight or running marathons pre-pregnancy, DON’T START. Stick with what you have been doing. And if you haven’t been doing anything, start by finding things to do that will keep you active. Long walks on the beach, pre-natal yoga, eating bon-bons. (Okay, maybe not that last one.)

As far as skating is concerned, you can keep doing it. But be aware that as you get further along in your pregnancy, your joints get a little bit less stable. And your feet get really swollen. It’s hard to catch your breath. And you feel like you’re going to die 24/7. Pay attention to the signs. When your feet are too swollen to fit into your skates, it’s time to stop.

4) You’re going to want to come back to the sport immediately.

YOU will be fine. For awhile. Your game will improve because you’re throwing yourself into your off-skates training and attending as many practices as you can to get out of the house.

But somewhere along the line, your body will remind you that you gave birth to a human. Granted he was pulled, barely breathing, from an incision in your lower abdomen, but that’s pretty traumatic too.

That unrelated hip flexor/lower back issue you’ll experience when he’s 1? Not unrelated.

All of those other skaters you’ve seen/heard come back from pregnancy that immediately sideline themselves? Not unrelated.

The 9-month injury is a full body injury. You can’t just stick pins into a broken ankle and focus on upper body work for 3 weeks. There’s deep shit happening in there. Your hip structure has likely changed. Your joints and connective tissue are still a bit more elastic than they should be. Your deep core musculature has been stretched and stressed more than it ever has before.

If you really want to come back fast, you’ve got to come back slow. Focus on rehabbing your core and pelvic floor before you start worrying about anything else. Otherwise you’ll be peeing every time you get hit. Or so I’ve heard…

At least not for you.

The prevailing standard in the fitness industry for all women, not just athletes, is that you have to get your pre-baby body back. As if that’s even a thing.

Listen. You can never have your pre-baby body back because you’ve had a baby. Sure, he was removed from you like a tumor, but you still grew it yourself.

Can you look as good or better than you did before you got knocked up? Sure.

Can you play as good or better than you did before you got knocked up? Absolutely.

But remember, this is a deep game. When you’re recovering from pregnancy, what you see isn’t always what you get. Build up the strength and stability in the non-sexy places before you start worrying about 6-pack abs.

And, despite the fact that it feels like you’ll always carry around the extra baby weight and your face will always look like Violet Beauregard mid-blueberry transformation, you won’t look pregnant forever. Time heals all wounds. And also zaps pregnancy fat. Go figure.

6) The things you used to think were SO important won’t be quite as important anymore.

Remember the time when you had your finger in every pie you could reach? That time is over. In fact, someone is going to tell you about something that’s happening — at work, within your league, etc. — that you think is a stupid and terrible idea.

The kicker? You won’t care enough to argue about it. You might half-heartedly attempt to talk sense into some people, but that’s the upper limit. If everyone else wants to burn their houses down, you’ll gladly stand back and enjoy the heat.

Okay. So that’s a little melodramatic, but when you have to sing “Wheels On The Bus” 100 times a day, that doesn’t leave much time for pointing out that the current fundraiser is a waste of time and resources.

I have to use all of my energy to get this damn kid to eat a fucking vegetable. I don’t have time to tell you that your marketing plan is a waste of money. Or that the travel schedule is too rigorous. Or that these staff meetings are sucking everyone’s soul.

I CARE, but I don’t really care. That’s the mantra of motherhood. If it doesn’t keep my son from coloring on the walls or taking his pants off in public, I don’t have energy for it. And that’s okay.

The key to making it through a 9-month injury is to adjust your expectations. Things will be different than you expected. Much different. Click To Tweet

Give yourself a break. Give everyone around you a break. Put your spawn in the crib or somewhere they’re safe. Go outside where it’s quiet.Take a deep breath.

Every pregnancy. Every person. Every mom is different. Be the person you want to be. Be the mom you want to be. It all falls into place somehow. Fuck what everyone else thinks. 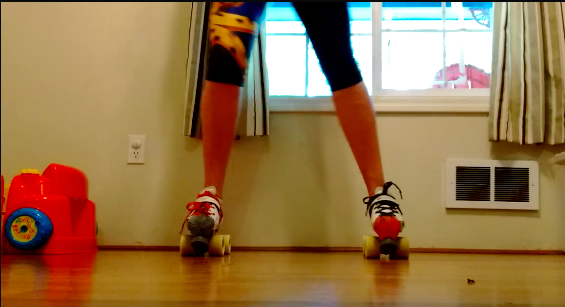 So You Want to Learn How To: OWN YOUR WHEELS

So You Want to Learn How To: OWN YOUR WHEELS