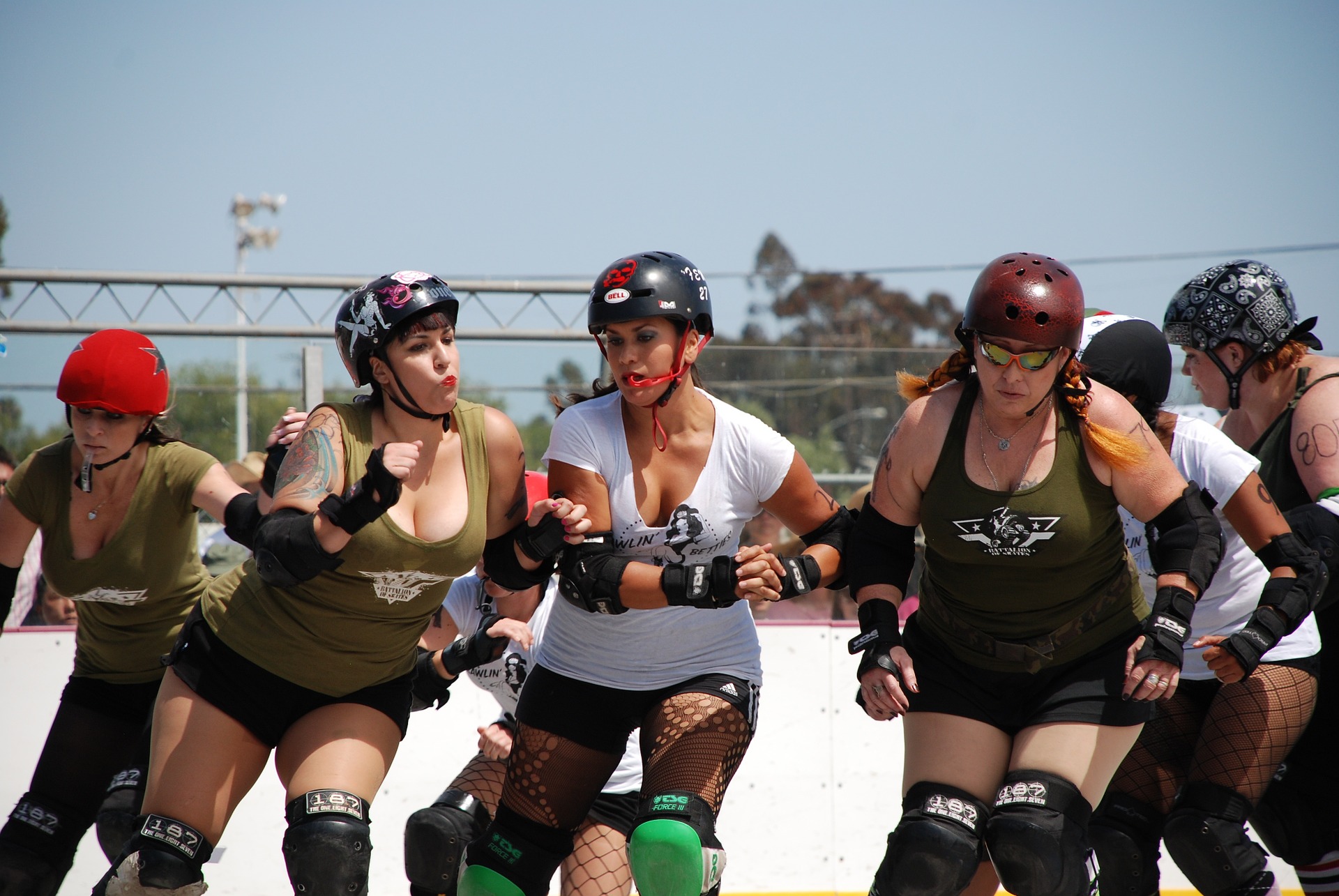 Recently, in a forum (I spend lots of my time creeping on forums, okay?), the question of the 27-in-5 and it’s usefulness as a minimum skating skill came up. Again.

The 27-in-5 isn’t inherently bad, although it does have some problems. Lots of skaters struggle with it for a looooong time and that brings up concerns and questions, of course. There are certainly reasons that it exists and I will fight to the death to maintain standards of skating safety for new (and veteran!) skaters.

Teams run the 27-in-5 or skate in pacelines for multiple reasons: to prepare for the lap test, build endurance, or run certain drills. That’s all fine. But if you’re looking for alternatives to mix up practice OR build endurance and skating skill in different ways, here are a few of my favorites:

If you’re familiar with Booty Quake and Roller Derby Athletics (like who isn’t?), then you’ve probably heard her take on building up your endurance for the 27-in-5 without having to do the 27-in-5 ALL THE TIME.

Part of mastering the 27-in-5 is just getting comfortable skating laps. You do that by skating laps. It will help you learn your edges, teach you how to use the track to your advantage, and increase your 27-in-5 score. Or decrease the time. Whatever.

These are not fun, but my old coach implemented them when my team was struggling with 180° toe stopping. It’s a lot like what I used to do in high school basketball. In case you also have horrible childhood memories of doing that

Lines are nice because you can work in multiple stops — or skaters can choose the stop they most want to work on — but they also require sprinting off the start. (The key to this drill, actually, is that the skaters have to really sprint out of the stop.)

Sprinting increases overall endurance and builds power at the same time WITH the added benefit of allowing skaters to hone their stops at high speeds. The downside is that this drill can eat up a lot of time and doesn’t mimic the pressure of stopping in traffic that so often trips people up.

This is a game I used to play when I was a summer camp counselor that I brought to my team. It’s a blast (if you’re into games) and depending on how you play it, can be a huge bout endurance builder.

It requires a bandanna, longish towel, or extra jersey for every person in order to play the game. Every skater hangs the piece of fabric out of the waist band of their pants — like a tail — and the goal is to be the last skater with your tail still in place.

Once the game starts, you chase after each other, maneuver around each other, and generally try to steal the tails off of other skaters. The rules to this game often change over time. My team had to set up certain rules the more we played the game (i.e. tails have to hang to mid-thigh, you can’t hold on to your tail) and you can set other rules however you want as well.

Usually skaters start inside the track boundaries, but able to skate in either direction. Once your tail is stolen, you’re out. But you can modify the boundaries or the direction they skate. You can allow skaters to replace their own tail with tails that they’ve stolen. If you want games to last longer and truly build up some overall endurance and short burst ability, you can set the boundaries and rules accordingly.

This is a pace line of sorts. (Shocking, I know.) Everybody starts in a pack and each skater is assigned to a team. The size of the wall can vary depending on how many skaters you have, but aim for 3-4 blockers per team. If you’re fancy, you can require them to wear matching jerseys, but I like the additional awareness built when skaters simply have to remember who is on their team.

Get the pack skating at a medium pace. Then call out each individual team (by color or number or mystical beast or whatever you want to use) and that wall has to race to the front of the pack, put on the brakes — together —  and bring the pack to a stop. Once the pack is fully stopped the team then has to race all the way around the track to the back of the pack again.

The faster pack speed everyone else uses, the more endurance you can build with this drill. To more closely mimic game play, mix up your pack so the walls aren’t constantly right next to each other.

This drill can also be slowed down used as a drill where the walls ARE in a paceline and the wall has to break apart, run up the in or out, meet in the front, and plow the wall to a stop. When you slow it down, it forces the lines to really think about who should be where in the wall to make it the most efficient.

Another former coach of mine brought this game in and it’s great!

Start in a pack (the sheep) and before everyone begins skating, they must closes their eyes and a coach or someone outside the pack chooses a “wolf”. The group starts skating at pack pace and then a whistle is blown to release the wolf. (I like to howl or yell “Release the Hounds!”, but I’m a weirdo.)

The wolf’s job is to pick off one of the sheep by knocking them out of bounds and positionally blocking them for 3 seconds — you can adjust the time as needed for your league’s ability. It’s also up to you whether just cleanly knocking the person out of bounds is enough or if you wan to have your team practice the positional blocking piece.

Once a sheep has been captured by the wolf, they join the wolf pack. Now the pack has to work together to get another sheep and — hopefully — the sheep are protecting each other. You can set a limit on how many wolves need to be collected or just go until there are no more sheep. Or one lonely sheep.

If you need to work on your plow stops, but just don’t get tired enough when you do — this is your drill.

Partner up with one skater in front and the other lined up behind. The partner in the back pushes straight forward (like a jammer) against the back of their partner — in legal target zones — and the partner in the front is trying to stop them, ideally with a good, clattering plow.

This is physically tough on both partners. The drill can be run for a distance (full lap/from one end of the rink to the other) or time (1 minute).

You can also have the partner in the front pulling the partner behind while that partner plows. Just have the front partner reach both arms behind them and the back partner hold on to their wrists or hook their fingers over one another.

If you have any other alternative endurance drills that your team uses, I’d love to hear them. You can comment below or head over to Facebook and share on the page. If you run any of these drills, film them and sent them over, too!