What Are You Really Afraid Of?

There’s this installation at a skate park near my house called a “pyramid”. It’s essentially a four-sided ramp with a flat top, so you could — in a perfect world — skate up one side, across the top, and down the other in multiple directions. (It occurs to me now to wonder why it’s called a “pyramid” and not a “plateau”…)

As far as inanimate structures go, it’s not that impressive. But I hate it. Loathe it. Fear it. 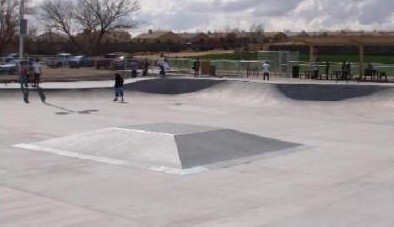 Doesn’t look very scary, does it?

I recently started a game through Facebook called the International Game of Roller Skate. The game is geared towards park skaters and has varying levels all the way from beginner (ME!) to super advanced. Each level sets tricks for the skaters in the game to do and you get to go out, give them a shot, film them, and hope you pass. It’s like a big game of HORSE, except instead of spelling HORSE for every basket you miss, you spell SKATE for every trick you don’t pass.

The very first trick for the beginners group I’m in was to roll up one side of the pyramid and down the other. In the first days of the challenge, I’ve done the following things on that pyramid:

If you follow me on Facebook, you probably know that I’ve been wanting to try park skating for awhile; 2 years to be exact. But I never got around to it. There was always some excuse. And that’s exactly what they were. Excuses.

The only thing keeping me from park skating was myself.

I joined the game on Facebook knowing that I needed something outside of myself to hold me accountable to doing this thing that I wanted to do. Have you ever done that? Sometimes we’re so afraid of what we want that we need a little nudge to get us moving.

The opportunity to join the game didn’t eliminate my fear. In fact, I hemmed and hawed and debated about even throwing my name in the pot (until a sudden burst of bravado had me typing “I’m in!” on the thread). All I knew was that it was something that I really wanted to try and THIS WAS MY CHANCE!

Before I could start, though, I had to confront a few things. Namely my fear and my ego.

There’s this saying circulating…somewhere…that says that the word FEAR stands for “false expectations appearing real”. Essentially, the expectations for how things might turn out keep you from ever knowing how they actually will turn out.

The trick is getting to the bottom of your fear.

Fear, like anything else, needs a bit of evaluation sometimes. It requires you to look it in the eye, recognize it for what it is, and CHOOSE what to do about it.

It turns out, in this thing (as in most things I’m afraid of), I was afraid of looking stupid. I was afraid of not knowing what I was doing. I was afraid of being judged. How egotistical is that? As if I’m important enough for the other skaters at the park to even care what I’m doing.

Digging down to the root of your fear can be scary, but it can also illuminate something surprising. Something easy to fix. Something that gets you that much closer to the thing you want to do.

2 — “WHAT WILL HAPPEN IF THE WORST THING HAPPENS?”

Once I identified what the worst thing was — in my mind — I had to ask myself if it was really so bad. If I go to the skate park and a bunch of jerks on skateboards make fun of me, is that really so bad? And what does that say about me?

Because here’s the thing: I already know that I can’t park skate. Someone that makes fun of me for that has their own problems; that’s not MY problem. It only becomes my problem if I let it keep me from doing something that I want to do. (NOTE: So far, not a single person has mocked me at the skate park. They either ignore me or are genuinely interested in park skating on roller skates.)

This question might pull you up short in the pursuit of your goal. For example, if you’re afraid of getting injured and getting injured means losing your livelihood (or something else equally untenable) then you might want to consider letting your fear win. For now.

I’ve asked myself this question a lot in the last year when it comes to scary things that force me to stretch myself out of my comfort zone. The answer with park skating was an emphatic YES! Imagine all the things I can learn in 2 years that I won’t learn or be able to do if I don’t start.

I get it, failure hurts.

Falling in front of people is embarrassing. Failing at a trick or skill doesn’t feel good. Struggling to accomplish something over and over again, only to still not get it, is frustrating AF. But letting failure make you fearful is a choice. The only thing you’ve actually hurt in the act of failing is your ego.

I avoided the pyramid trick for as long as I could; until I had filmed and passed the other open tricks. Mostly because I was afraid of falling again. I didn’t want to fail again. Then I realized that every time I didn’t even try was a little failure too.

I'd rather fall on my face IN THE GAME than spend my whole life on the bench. Click To Tweet

* I did not actually break my spine. But I was definitely sore over the next 2 days.