I Love it When a (training) Plan Comes Together

I used to love the A-Team when I was a youngster.

I don’t know why. I mean, have you watched that show as an adult? Those guys have to be the worst mercenaries ever. What are they even good at? One of them is good looking. One of them is bat-shit crazy. One of them hates to fly, but loves jewelry. And one of them smokes cigars and makes plans that have no business coming together, but somehow do. 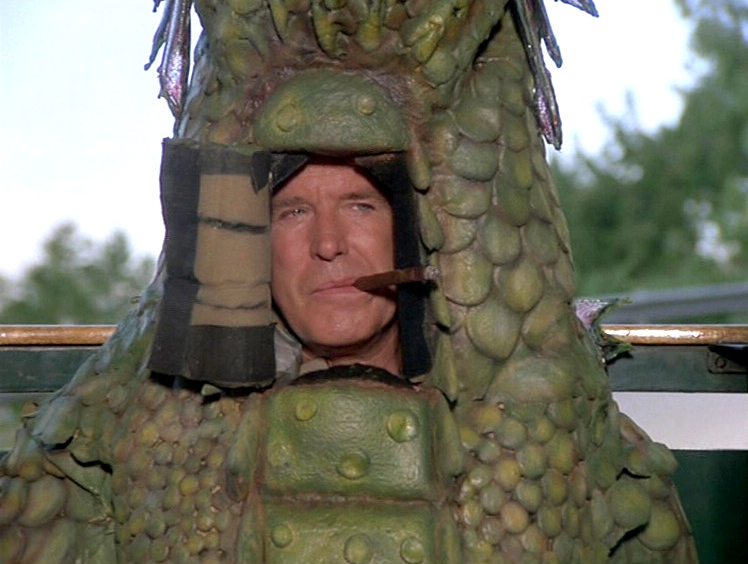 Note the presence of both a cigar and a ridiculous looking plan.

Hannibal was my favorite. Calm, cool, collected, and possessed of just enough magic to make any plan come together.

The unfortunate truth for those of us that don’t live in TV Land is that plans rarely come together on a wing, a prayer, and a Cuban Cigar. And, if you can’t hit the broad side of a barn with semi-automatic rifle fire, being a mercenary shouldn’t be in your life plan. Even if it worked out for Hannibal, Faceman, “BA” Baracus, and Murdock.

There is one basic problem with running on motivation:

While your step 4 might be a little bit different, the process is the same the world over.

Those people have a system.

The saving grace of building a system is:

When you implement systems, plans come together even when you’re wearing a ridiculous swamp monster costume or your main asset is a pilot that should probably be in a mental institution.

Recently, I got to sit in on a talk given by Craig Ballantyne where he described the value of having a system versus having motivation.

Imagine two people heading out to a holiday party. Both of them are interested in losing fat, eating healthier, and avoiding the indulgences that usually come with the season. One of the partygoers is a vegan, the other one is not. The vegan has a system in place — of beliefs and prior behavior — while the non-vegan is likely relying on motivation to avoid the dessert buffet.

The first time that someone at the party offers the two of them cookies or egg nog or a big greasy cheeseburger, they both decline. Maybe they both decline the second time, too. But it’s likely that EVENTUALLY the non-vegan will find themselves succumbing to the temptation of the indulgent foods because they don’t have a system in place. Motivation runs out. Especially in the face of holiday cookies. (Russian tea cookies, anyone?)

Often times, when systems are in place, the thing that would derail you doesn’t even make it to you. In the case of a vegan, their friends and family learn that they have a system in place and ultimately stop offering non-vegan food. Or have a knock-down, drag-out discussion about it over the holiday table. Whichever.

There comes a point at which the system that you’ve built become who you are.

You avoid eating animal products because of your belief system (<– system!) and now it’s easy to do, you’re not even interested in eating those foods (habit). You take vitamins everyday because you used to lay them out on the counter to remind yourself (system), but now it feels weird if you don’t (habit). You make it a point to train for at least 10 minutes when you’re feeling unmotivated (system), until training becomes something that you just do because you like the rush or you know you’ll feel great afterward (habit).

Humans are creatures of habit. If you can systemize a behavior then get it to evolve into a habit, 90% of the hard work is done for you.

Habits work because they’re (nearly) automatic. I have a habit of locking the backdoor when I come in to the house. I don’t even realize that I do it until my husband is pounding on the door yelling at me about locking him outside. Again. It’s so automated that it happens without conscious effort. In fact, if I want to leave the door unlocked after I come inside, I REALLY have to think about it. And it feels super awkward.

If you have a training goal you’re trying to reach — which you should, by the way — you’ll be more likely to reach it if you can build systems around it.

Rome wasn't built in a day? It wasn't ruined in a day either. Stop using one slip-up as an excuse to quit training. #nevertwoinarow Click To Tweet

Ultimately that’s what made the A-team brilliant. Each member had a very specific role, a system that they followed to aid the team. And (a number of) habits that they relied on to get the job done.

And really, isn’t that the best feeling in the world.

So You Want To Learn How To: KEEP A TRAINING JOURNAL

So You Want To Learn How To: KEEP A TRAINING JOURNAL