Quit Standing on Your Own 2 Feet

I live in the Pacific Northwest and, as such, am frequently exposed to HUGE names in roller derby on a regular basis. Exposed in the “Hey, I just met you and this is crazy” way not the “I’m not wearing anything under this trench coat” way.

WHAT THIS MEANS IN THEORY: I get to meet and engage with people that are awesome skaters and that I look up to. We have meaningful and deep discussions about roller derby, then are best friends forever.

WHAT THIS MEANS IN REALITY: I sit quietly fangirling. The end.

But, in the derby saturated PNW, it’s inevitable that I would end up skating with a big roller derby name. It wasn’t just in a scrimmage or pick-up bout, either, but as a legit part of a team of pretty badass skaters.

A lot of badass skaters. That I looked up to.

Skaters who were in the documentaries I watched. Skaters who had gold medals. Skaters that were in video games. (!!!)

They ended up just being normal people (imagine that…), but one of them said something during a practice that has always stuck with me: 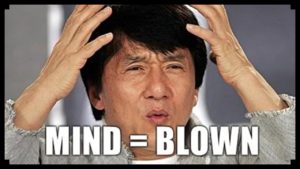 What are these words you are saying? Why haven’t I heard them before?

Since that pivotal conversation, I’ve slowly been coming around to her side; not just about avoiding ass bruises. I’ve started to see that how you transfer your weight during game play can translate to success or…not success.

This is my bold, sweeping conclusion:

Derby is a sport best played on one foot OR the other. Not both.

I’m not advocating that we spend the majority of our bouts skating around like flamingoes or other tall, gangly birds. What I am suggesting is that EVERY SKATER needs to learn to manage weight transfer from one foot to the other and use that to be in reactive athletic position at all times.

“The walking of man and all animals, is a falling forward.”

Ralph was right. If you want to go anywhere, you have to essentially fall from one foot to the next. (This is slightly hyperbolic, but hopefully you’re with me.)

Derby is a game that can be won or lost in a moment. You don’t have time for that! You need to be able to react (and move) in the first moment.

The best illustration of the 2 feet v 1 foot difference comes with the plow stop.

Let’s imagine we have two skaters from different teams.

Which blocker would you want to be behind? 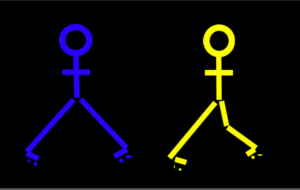 No. The yellow skater does not have a broken leg.

When I first learned how to do plow stops, everyone thought it was “the wider the better”. Both of your feet splayed out as wide as they can go and your center of gravity sunk between them.

With your weight evenly distributed through both of your feet (and your actual center of gravity in between them), you’re not going anywhere fast. You’re not stopping fast. You’re not speeding up fast. You aren’t as agile. You can’t recover as quickly. You’re basically a lumbering Frankenstein that a quick jammer can juke right past.

In order for the blue skater to move with the jammer (or goat) she’s blocking, she has to:

And, if the blue skater consistently plows this way, she has to go through this sequence EVERY time she wants to move from her plow stop into another position. Or from plow stopping here to plow stopping over there.

Recently, I’ve become a much bigger fan of the single leg plow stop. The actual stop comes from the friction of only one skate against the ground while the other skate stays underneath you and supports the majority of your weight.

In order for the yellow skater to move with the jammer (or goat) she’s blocking,  she has to:

Shifting her weight is something that the yellow blocker can do immediately without needing to regain her balance or reposition her feet. Once her weight is shifted, she can easily redirect her feet (and her body) in the direction she has to go.

A skater that remains in this “ready position” — with the weight centered over one foot or the other — is more reactive, more agile, and more likely to be a pain in your ass.

Most athletic stances focus primarily on getting your weight shifted forward onto the balls of your feet. This isn’t really an issue for roller derby skaters as most of us have our plates mounted in such a way that if we put our weight in our heels we fall flat on our ass.

Here’s the thing, though. If I asked you to assume an athletic ready position RIGHT MEOW, chances are good that you wouldn’t just be shifted onto the balls of your feet. You’d also sway slightly back and forth. Because this position gives you the most options. (Check out some more about derby’s unique ready position in this article from Daft Spunk.)

There’s the option to sink down and dig in, but you can also move in any direction pretty readily.

You can jump to the left.

Take a step to the right.

Put your hands on your hips…uh. Nevermind. That’s something else.

It’s not just relevant to plow stops, either.

Even in situations where they’re waiting around, they usually shift from one foot to the other. In the clip above, Bicepsual would never have been able to backward block as effectively if she had simply planted both of her toe stops and leaned in. (Although there are a lot of other important and top-notch blocking mechanics at work here, too.)

As crazy as I thought the advice was at the time, I’ve been coming around. The more I actively practice keeping my weight shifting from one foot to the other, the better I get. I block better. I jam better. I feel more reactive. 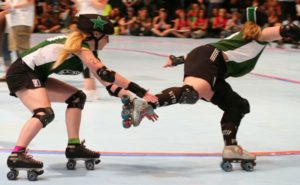