Your Roller Derby Training Happens Around a SEASON

A while back, I went on a bit of a tear to get people to start thinking about training like an athlete. Well, I mean, I guess it was a tear. If being on a tear can be described as one impassioned email, an equally impassioned blog article, and a FB live post where I mention that Marshawn Lynch might be my patronus.

In the video, I chatted about all the things that fall under the phrase “train like an athlete”. As far as I can tell, the 2 biggest contributors to skaters not training like an athletes are:

Too many skaters jump from thing to thing or dabble a little here and dabble a little there. But if you’re an athlete (which you are — see #1 above), your training happens around a SEASON and you need to be looking at your ENTIRE SEASON when you’re planning what to do.

This is typically called periodization, but it doesn’t really matter. The idea is that you divide your time up into periods and each period is assigned a different training tactic. There’s scientific support for periodization training for athletes and it’s even where the almost entirely ridiculous notion of muscle confusion stems from.

Your Season Has Multiple Parts

In terms of training like an athlete, you want to match up the type of training you’re doing with where you are in the season. By doing this you can actually maximize the effectiveness of your training and often have more success with the rest and recovery pieces as well.

Most athletes don’t cross train 5 days a week during their season because the demand on their body is too high. But how often you train is really only half of it.

To make these easy, let’s say that we’re going to divide our season into 4 different periods:

Each Part Needs to Be Approached Differently

And during each period, you need to focus on things that will A) help you prepare and maintain your skills for the season, B) keep you healthy and sane, and C) match up to the types of sport specific work you are doing during that period.

For example, in pre season your body needs to prepare for the rigors of the competition season, so both practices and cross training are geared towards that. During the season, you want to focus your energy on competition so cross training tapers off a bit. And each strenuous on season is followed by a period of active rest (which is equal to a few days of light activity per week) for 2-4 weeks.

It can be hard to visualize (and we all have insane derby schedules), so here’s the periodized schedule I *TRY* to stick to during my season. Which, as you can see, is totally weird. 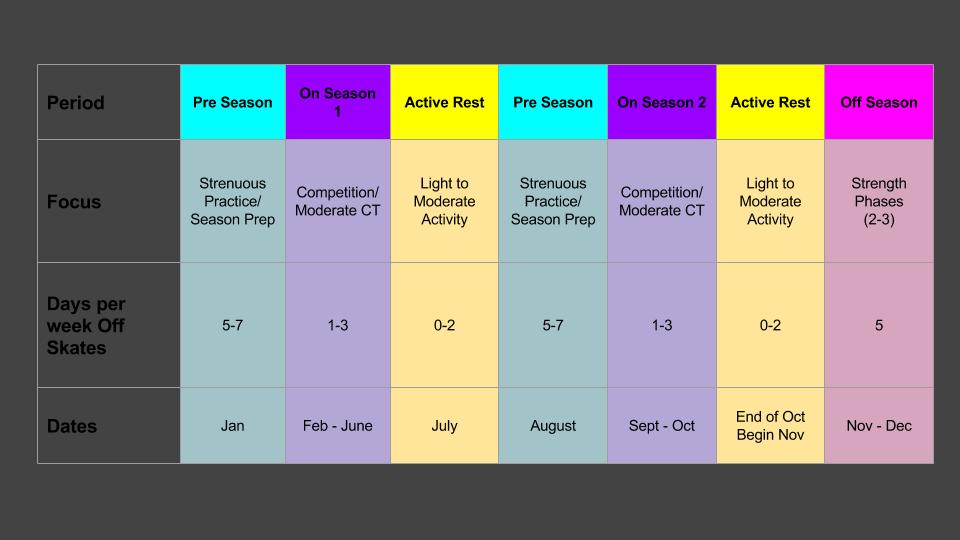 The trick to periodization is paying attention. You won’t know if cross training for 1, 2, or 3 days during your on season is right for you until you try it, collect the data, and evaluate the data you’ve collected.

The good thing is that you have an entire year to figure it out.

PRESEASON IS COMING. GET READY.

The beginning of the season can simultaneously be the most and least favorite part of a season. You’re giddy with the excitement of lacing up and skating again, along with the change to reconnect with your teammates and the sport you love. But you’re also sick with dread about how rusty you are.

Once the season starts, the rust has got to go. We need it gone so that when that first game hits, you’re skating at the same level that you ended last season on.

A 5-week training program that helps you shake the rust off and avoid burning out while doing it:

The Cephalopod Squad and the challenges only open up 2 or 3 times a year, so if you’ve ever wanted to join the squad OR you need special help prepping for a big pre-season ahead, THIS IS THE TIME.