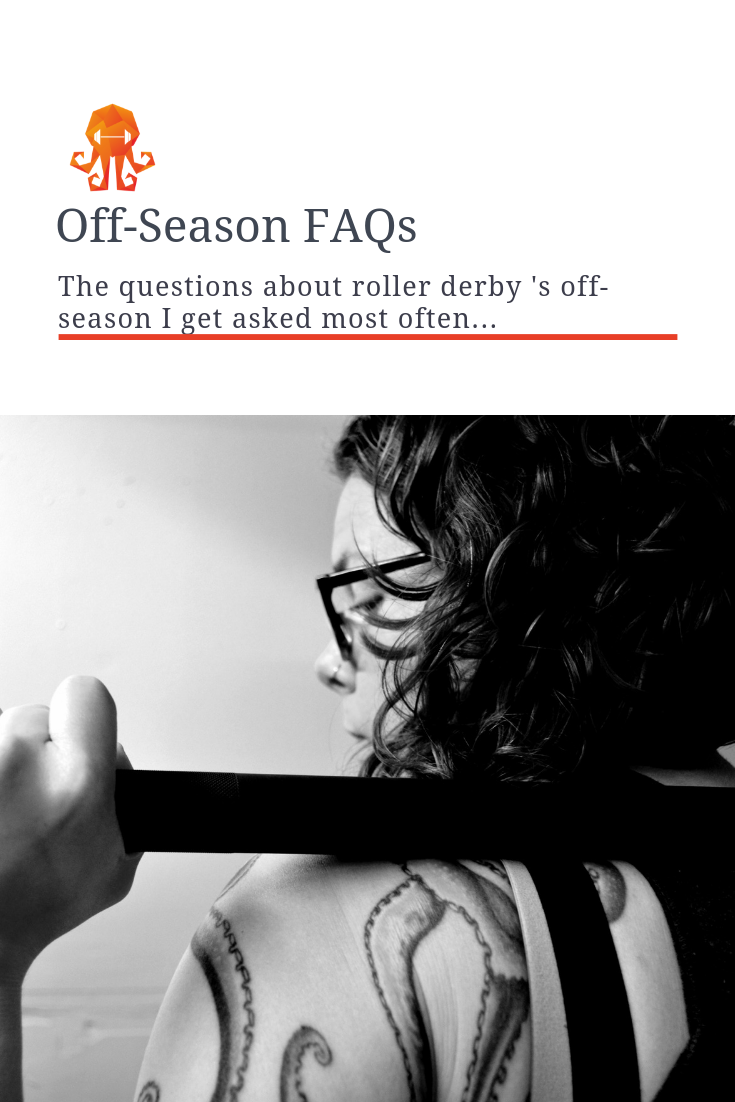 A Case for Doing What Prime Tells You

Okay, okay. So the subtitle for this one is a little tongue-in-cheek. Yes, you can do exactly what I say and have a pretty successful off-season. But for me, it’s much more important that you have the knowledge to create an off-season that works for you, whatever that might look like.

Parts one and two of this series covered WHY you need an off-season and HOW periodization fits into your planning.

The basis for having this conversation at all is to get us, as athletes, thinking about what our priorities are at any given time.

If you’re in season and competitive play is most important, then performance on skates is key. Everything you do with your training should feed the beast of crushing your enemies opponents come game time.

Ultimately, though, what the goal is for your off-season is up to you.

That being said, there are a number of relevant questions that pop-up when I start talking about the off-season. And this article addresses THOSE.

Not this one though.

THE FAQS OF OFF-SEASON

Is your off-season advice the same for new skaters?

No. Usually not. Because learning to skate is a foundational skill to playing roller derby and foundational skills require A LOT of repetition to build the proper grooves in your brain, I often tell new skaters to skip their first off-season.

I actually go back-and-forth on this answer quite a bit because ultimately it depends on how new skaters FEEL. A lot of new skaters don’t want an off-season during the first year and staying on-skates can help boost the automaticity of skills that the veterans already have (turn-around toe-stops, various types of basic footwork, etc.).

However, sometimes new skaters have been skating for long enough by the time off-season rolls around that they should take one as well. I kind of arbitrarily set the time frame at a year. If you haven’t been practicing for a full year when your first off-season hits, keep attending practices.

But, again, it’s entirely up to you. If you feel like you need an off-season, take one. If you’ve been skating for longer than 2 years or skated through your last off-season because you were new, take one.

You don’t have to NOT SKATE during the off-season. But you should probably not skate roller derby. Session skates, trail skates, park skating, jam skating, those are all great cross-training options for the off-season that keep you on your skates.

The key doing anything on-skates during the off-season, whether it’s footwork drills in your garage or ramp skating at the park, is to work your weak side. We all have one, right? Skating in your off-season allows you take some pressure off and build some more uniformity within your movements.

You may never get your right side hockey stop to look quite like the left, but you should practice it. A lot. And get it as close as you can.

How to not feel guilty about doing nothing because you need it mentally/physically?

The real question here is: What do you feel guilty about?

I’m not saying that flippantly or as a way to dismiss your feelings, but what about taking time for yourself is producing guilt? Guilt usually comes to us when we feel like our actions or decisions are hurting others.

I’ve talked about this before in one of my Facebook Lives about guilty surrounding the off-season is a bit narcissistic. It implies that you think you’re somehow harming your team irreparably by taking time for yourself. Which is hopefully not the case.

This is also one of the big reasons why I advocate that every team has an off-season plan. It provides a permission slip for skaters to ACTUALLY TAKE TIME OFF. If your team has written you a permission slip, use it.

Lastly, often the guilt comes from feeling like you aren’t meeting your own expectations in regards to getting better or sticking to your training plan, but those are your expectations. Re-write them and give yourself some leeway for a few weeks. Trust yourself enough to know that you will work hard and be consistent when you return because you’ve already been doing that this whole time.

How do I give myself an off-season if my league doesn’t really take one?

This depends a lot on what sorts of options your league provides in terms of things like a Leave of Absence or another form of leave.

I often joke that I’ve never made it through an entire season because I’m always using strategic downtime based on what else is going on in my life. That often looks like making sure I’m roster eligible for ranked and higher level games and taking LOA or Short Term Leave (which my league offers) during months where we have “less important” games.

I understand that might mean that my Training Committee could decide not to roster me or may move me to an alternate position because I’m not practicing as much. But that’s a chance I take because I play better and am a better teammate when I take downtime more often.

But I really hope you can convince your team to build one into their schedule!

I like to skate park in summer off-season. What will compliment that without ruining the OFF part?

Skate park skating can be a great fit for the off-season, but the answer to this question really goes back to a few points above: (1) What’s your off-season goal? (2) Are you working weak side and not just hammering the same derby movements over and over?

If park skating is just a way to keep you on your skates but NOT the ultimate goal, then you just set limits on how much park skating you do each week. When your main goal is in the gym, set the schedule for that first and fit park skating around it.

Any skating you do during the off-season should be FUN, though, and remind you of why you like skating in the first place. So maybe don’t schedule it and just go when the mood strikes? Whatever makes you happy!

What do you think is a good length for an off-season?

When I first started talking about the off-season, I said “2 months” because it was the number I landed on that would do SOME of the off-season job and wouldn’t get as much pushback as, say, double that.

I would personally love to see all of roller derby adopt a 4-month off-season. (Altogether, too, not 2 months here and 2 months there.) Most goal-oriented training programs take about 3 months of consistent effort to see amazing results, so that gives you a full phase of off-season gym work PLUS an additional month for prehab, getting into your care providers, and resting.

Should there be a 100% rest part to the off-season?

Or at any point in the season where you need it. There’s only one you. And if you want to continue playing this sport for a long time (which, if you’re reading this, you probably do) then you need to be very protective of you. 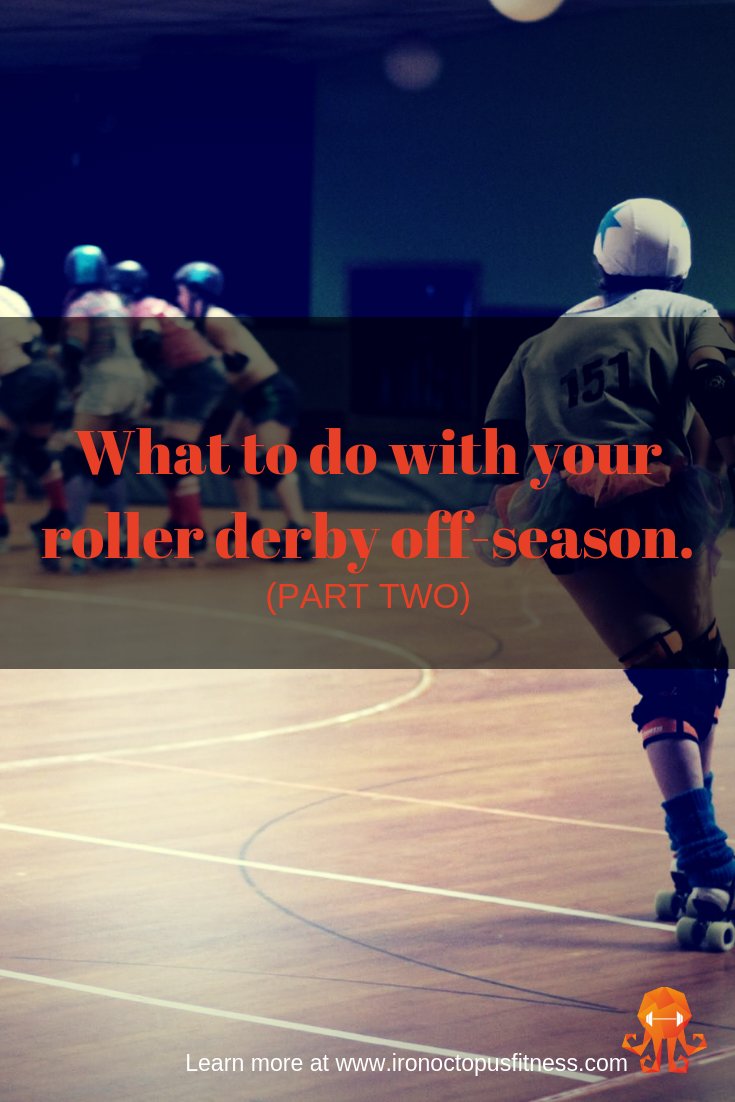 A Case for the Roller Derby Off Season [Part 2]

A Case for the Roller Derby Off Season [Part 2]